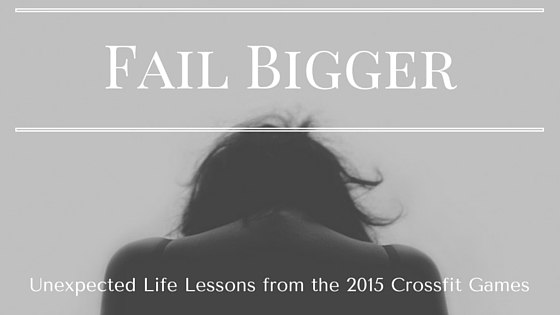 There were many amazing and surprising things that happened at the 2015 Crossfit Games. Most people whom I spoke with were impressed with the strength, endurance, agility and determination of the athletes who participated. It’s inspired many of us “mere mortal” Crossfitters  to set  higher goals, to dig deeper into our personal determination and to go further and faster than ever.

In every other year, I’d be thinking about these same things . In all the years I’ve watched on TV or from the venue, I’ve always walked away with new resolve to become more competitive at Crossfit. Most of us definitely dream about getting to this elite level of competition. There’s often a little glimmer of belief that it could be possible by just doing some things differently.
But not this year. This year, I had such a different realization, and one that applies not just in my pursuit of being a better Crossfit athlete, but actually becoming better at everything I want to improve and excel at doing.

My Realization: Learn to Be OK with Failing Bigger
For anyone who does Crossfit regularly, you know when working an Olympic lifting session that you have “good fails” (where you do nearly everything right but miss the lift) and “bad fails” ( the lift was a hot mess all around). Both are learning opportunities.
But to decide to fail bigger is a different thing. It almost sounds like you are striving to be a big, fat loser, or adopting a failure mindset. Actually, it’s the opposite. When I realized  that in order to play bigger, I have to be willing to FAIL bigger, (almost making friends with this idea), something sparked in me, something that had been missing.

The idea of “Failing Bigger” Got Me Thinking Deeper.

Where It All Clicked
During the Snatch and Clean and Jerk events at the Crossfit Games, every step forward on the ladder required more and more confidence, focus, courage,skill and determination because the weight on the bars went up with every step forward. There were times where athletes were confronted with lifting bars that matched or exceeded their previous personal records in order to keep advancing and to attempt to place as high as they could on the leader board.
This required, more than anything, the courage to fail at something that was monumentally important, and possibly heavier then they’d ever tried! All of this performed in front of thousands of screaming fans, coaches, family members and fellow athletes. That is some kind of intense pressure! He goes down from the bar drop EZ coming back to attempt the lift again EZ successfully completing the lift. The crowd and competitors go crazy with applause!

But ahead they pressed and many of the athletes completed the workouts with new PR’s far beyond what they had ever hope they’d do in competition. It’s the ones who failed in those conditions that captured my attention because as long as their was time left, they kept going. It didn’t matter that they the bar had landed on their heads, or they fell and landed on their asses, they kept going. And as they pressed on, the cheering of the crowd got louder. There was no booing, no criticisms just people genuinely encouraging the athletes to keep going. How amazing it must have been to stand on the floor of that competition in that moment, win or lose!

My Big Ah-ha
This definitely made me think about my own life, and where I may be playing small. Maybe it resonates with yours too, check it out:
When ever we are faced with failing at something, especially when there are people around to see it, we naturally expect the worst in terms of the response, feedback and fallout. At this Games though, I realized that even though some of the athletes pressed beyond their limits and failed, the people in the stands and watching online, shared the athletes disappointment about missing. This is primarily because 99% of the people watching them attempt WANTED them to succeed and could relate to the letdown of falling short.

The realization is that in order to live bigger, you must be willing to fail bigger. In that shift of thinking, you can then walk in the expectation that nearly everyone is for you, and actually not going to criticize or chastise you for the attempt OR the fail. They actually will encourage you to pursue your goals, in spite of the failed attempt.
Personally, it changes how I do everything. It frees me from the trap of perfectionism, the paralysis of fear, and the wall of resistance that keeps me from playing as big as I possibly can any time it’s Go Time in my world.

Share you thoughts and insights about the how the 2015 Crossfit Games may have impacted your thinking  about your life and your goals.